For a while now, we have been teasing you with the promise of introducing our wonderful volunteers by means of guest blogs. Well, we’re now ready to publish our first guest blog and it’s a good’un! Meet Joe – communicator extraordinaire and avid Big C supporter. 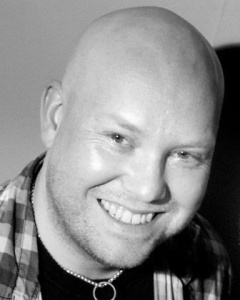 Hi, my name is Joe and I’m helping support The Big C because I’m shit-hot and everything always has to be all about me. Well, there’s that and the fact that I’m kind of married to event as it was the brainchild of my genius husband and our hilariously talented friend, Mhari.

And when family and friends decide to initiate totally altruistic and awesome projects that make you feel lazy, selfish and inadequate, I find that the best way to boost your self-esteem is to get involved and blind everyone with your deliciously brutal brilliance.

But attention-seeking and marital obligations aside, The Big C truly is an amazing invention. Possibly – and I say this with some hesitance – better than cruise-ship Eurovision parties hosted by fat drag queens, and so worthy that I practically need a halo just to write this.

As much as I would like to avoid sounding like a girl, in all honesty I am exceptionally lucky to have this opportunity. Between my misspent youth as a homosexual slut and my persistent aversion to recycling, my ticket to the pearly gates was pretty much screwed till this gig came along.

I’m aware that the above all sounds quite selfish – and perhaps I am exaggerating just a tad – but I happen to think it reads funnier than, say, “it’s a cause close to my heart” (pussy!) or “cancer destroys so many lives” (boooring), so you can either bear with me or go read a blog about flowers and rainbows. I’m sure it will be, like, totally rewarding.

Bottom line is, cancer sucks, and not in the fabulous way that I used to suck in my misspent youth. I actually know this because, like many, many other people, I have experienced the loss of a family member to cancer. So despite anything totally inappropriate or childishly audacious I write here for comic effect, I genuinely do want to Roundhouse kick cancer in the face.

When someone close to you dies, it’s like the punch in the gut that just keeps giving. The void left behind is so full of intense, howling pain, at first you think your heart must surely be irreversibly shattered, with shards piercing every possible nerve ending in your body. As someone on the sidelines, the miserable helplessness is almost as devastating – and for all involved, kicking something in the face would most likely feel extremely therapeutic. The ex-husband, for example.

Sadly, kick-boxing is not something I do well. I’m far too unfit to even attempt anything that might vaguely resemble a Roundhouse kick. So to spare me the humiliation; here are my top five filthy-mouthed, ball-busting, vengeance-seeking, fictional female badass killing machines.

If this lot can’t batter the shit out of cancer, I don’t know who can. Well, scientists I guess, but let’s face it; curvy, ginger FBI agents aside, no amount of life-saving drugs can make *geeks* sexy.

1. The Bride, Elle Driver, O-Ren Ishii and Vernita Green – Kill Bill 1 & 2
Okay, okay, so technically, that’s four filthy-mouthed, ball-busting, vengeance-seeking, fictional female badass killing machines. But it felt like cheating to give four out of my five top positions to characters from the same two films. And besides, individually or en masse, you just know those crazy bitches are gonna get you good. Whether it’s the Hattori Hanzo steel, the Five Pointed Palm Exploding Heart Technique, or that deliciously insane whistling in the hospital corridor – you’re done for.

2. Catwoman / Selina Kyle in Batman Returns
Is it the impossibly tight PVC catsuit? Is it the whip and the high heels? Maybe it’s simply Michelle Pfeiffer’s feline features? Or those claws made out of spare parts from Selena’s sewing machine? Who knows and who cares! She looks wicked, kills for sport and she’s got nine lives. In your FACE, cancer!

3. Hit-Girl / Mindy Macready in Kick Ass
You gotta love an 11-year-old girl who is capable of single-handedly taking out two dozen fully grown, cold hearted, serial-killing drug lords and mafia members, all the while making cock jokes and shopping for rocket packs. Hit-Girl may be underage, but in a fight between her and the Deadly Viper Assassination Squad, who the hell could predict the winner?!

4. Pris in Blade Runner
I don’t know what it is about Daryl Hannah, but for someone so pretty and sweet, she certainly does psychotic robot well. Pris is quite literally a killing machine – one that very nearly squeezes the life out of Rick Deckard with her inner thighs. Not the worst possible demise, some might argue. To be fair, she is fighting for survival more than murdering people for fun, but the crazy eye make up, fierce back flips and lethal android power-thighs earn her a spot on my list.

5. Ellen Ripley in Alien, Aliens, Alien 3 and Alien Resurrection
Again, fighting for survival more than anything; but a filthy-mouthed, ball-busting, vengeance-seeking, fictional female badass killing machine nonetheless. Anyone who can take on the Alien monsters and win can surely Roundhouse kick cancer to a pulp?! And while Ripley starts out a perfectly normal intergalactic freight pilot, at some point during the Alien saga, the crazy flicks into her eyes and – boom – she’s the deranged clone she was destined to be. Aliens and cancer alike, watch out!

If you though that was funny, check out Joe’s own blog here.

How to get Big C tickets

The Big C: Big Comedy Gala will take place on Monday the 15th of August, Venue150@EICC. Tickets costs £20 with all proceeds going to Macmillan Cancer Support. Tickets available from www.venue150.com/2011/thebigc.html or by calling 0844 847 1639. Information: www.bigcomedygala.com