Thanks to everyone that came out last night to raise funds for Macmillan Cancer Support.  We’re sure you’ll agree it was an outstanding show.

As is common, we’re now fielding loads of questions about who the acts were and where they are playing.  So here’s a handy breakdown of everyone that performed.

The Boy with Tape on his Face

“EastEnd Cabaret is a saucy mix of excellent live music, x-rated lyrics, strong vocals, and hilarious comedy – all  wrapped up into a glossy package of 1930’s Berlin-style cabaret. Sex, songs, sass and LOLs…what’s not to love?!” 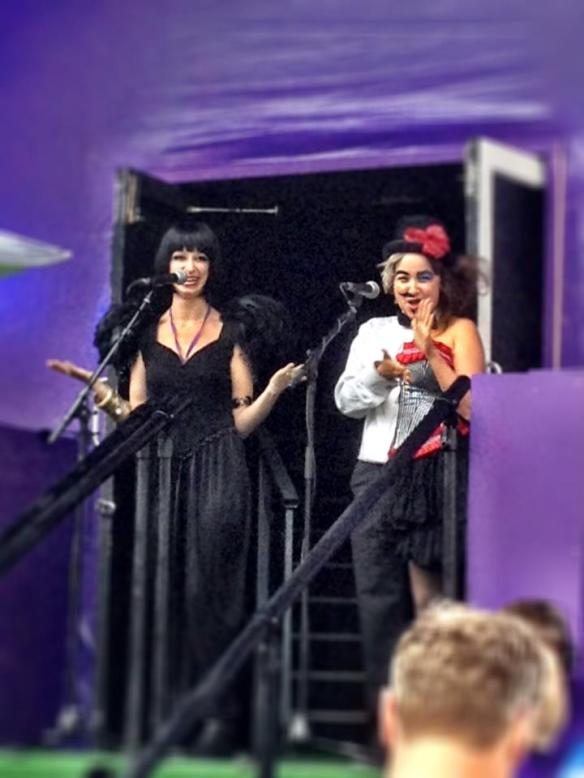 Bernie and Victy, opening The Underbelly launch at the 2012 Edinburgh Fringe

I was first introduced to EastEnd Cabaret at an Edinburgh Fringe Reception event in Adelaide, Australia, in 2010.

As a civilan hanger-on among the festival professionals, I was standing in the Garden of Unearthly Delights – the epicenter of the Adelaide Fringe – sipping white wine out of a plastic cup and feeling mildly out of place, when Jen (‘Bernadette Byrne’), Victoria (‘Victor Victoria’) and Tom (producer, writer and marketer) arrived.

At the time, I had no idea what EastEnd Cabaret was – I just remember being relieved to have found a trio of friendly and funny fellow Adelaide Fringe novices to chat to. Of course, Jen and Victoria weren’t in character at the time, or I might have creamed my pants.

Nowadays, the ‘Queens of Smut’ (as Time Out London called them) make me totally moist, but at our first encounter I was still finding my feet in the world of cabaret, and I’m not sure how well my constitution would have coped with the brash, multi-sexual filth factory that is Bernie and Victy.

Fastforward two years and a few months to last August, and I finally got the chance to cream my pants in a good way, when I went to see EastEnd Cabaret do their thing at the Edinburgh Fringe. Their thing, by the way, is very dirty, very funny, and very good.

For those of you who don’t know, EastEnd Cabaret is a saucy mix of excellent live music, x-rated lyrics, strong vocals, and hilarious comedy – all  wrapped up into a glossy package of 1930’s Berlin-style cabaret. Sex, songs, sass and LOLs…what’s not to love?!

EastEnd Cabaret is currently staging their brand new show, Dirty Talk, at the Edinburgh Fringe – and we’re lucky enough to have them performing at this year’s Big Comedy Gala as well. I got myself a delicious sneak peak (or should that be dick tease?) at the Underbelly launch a couple of days ago, and personally, I can’t wait for my full hour fix next week!

I highly recommend you cabaret fans out there get yourselves tickets to their show (link at the bottom of this page), as the five minute glimpse you’ll be treated to at the Big C is guaranteed to leave you wanting more.

In the meantime, below is Bernie and Victy’s answers to our regular Big Comedy Gala blog Q&A – enjoy!

What is your involvement in The Big C?

VV: We’re going to be playing a few songs from our new show, ‘Dirty Talk’.

Who is your favourite comedy hero, act or actor?

BB: My favourite comedy act is a drunk man that is always in a park in East London. He shouts ridiculous things at passers by, dances with pigeons and even got naked in front of some nuns once. I could watch him for hours.

Favourite comedy moment (your own or someone else’s)?

VV: We once watched a guy shoot a confetti cannon directly into his crotch. Onstage. By accident. It shouldn’t have been so funny, but it really, really was.

What in your everyday life always makes you laugh?

BB: Watching Victy styling her moustache in the mirror every morning always makes me laugh. She does a hilarious tongue poking out face of concentration.

Who is your secret celebrity crush?

VV: I’m a big fan of Tom Selleck – but it may just be moustache envy…

In five words, why should people come to (or support) The Big Comedy Gala?

Joining EastEnd Cabaret on the night are The Boy with Tape on his Face, Sean Hughes, Greg Proops, Caroline Rhea, Vikki Stone, Joe Lycett & Patrick Monahan, among others.